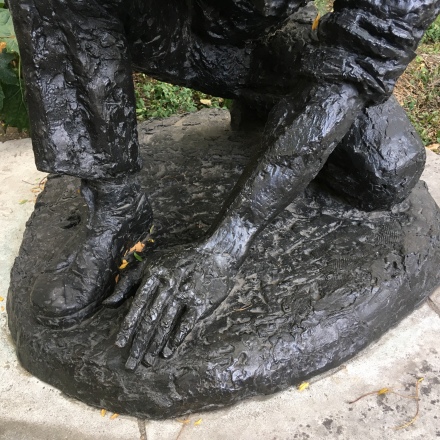 It was a bright morning in London and I was walking along London Wall when an iron man caught my eye: folded over a small patch of soil- it too cast out of iron- and trapped in the shadow of concrete buildings, the gardener was kneeling, perpetually caught in the act of covering over a seed just laid into the ground.

He was paying close attention, undeterred by the loud morning traffic all around him. Seeing beyond the hardened surface of the soil, he knew that in due time it too would yield to allow an inevitable sprouting.

He was perfectly alone on a small patch of cement, surrounded by busy roads and tall buildings, tending to a wilderness just out of sight, but whose beat could be heard amidst the car engines and the constant roar of construction sites.

At lunchtime someone would join him, sitting on a bench next to him, staring proudly at the city being torn apart and built again in front of their eyes, at the buildings erected and collapsed, cumbersome vessels leading nowhere despite their vertical thrust, appearing and disappearing like ships in the fog.

They would bite into their sandwich, eyes adrift into private reveries, quite blind to the sight of the folded iron man tending to his iron garden in the middle of a city that grew newer by the minute, ready to swallow.

And the gardener, himself unable to stir, would feel the shuffle of bodies whose shadows glided over him as they left, but his iron eyes remained locked in place,

As the blind men climbed back into their offices to keep the pulse of the city racing along, the gardener’s gaze burrowed deeper and deeper into his small patch of iron soil, past the seed he had just laid- was it the first? The last?- until he could clearly see a tangle of roots beneath the pavement, kept alive by an intricate network of underground currents.

The gardener, folded in place, undeterred, kept tending to his garden, in the heart of a city confused by its own speed, interrupted in mid-sentence as new conversations rolled into the spaces left empty by the silencing of other voices.

Afternoons went by lazily, the din of cranes and drills and traffic slowly fading to an empty evening stillness that seemed to fall out of time with the dying of the light.

Surfaces became mercurial again, volatile, revealing tears through which other stories could be glimpsed- other rhythms, other bodies, distant echoes.

The gardener remembered them all: the sounds, the voices, the movement of other bodies brushing past him as he waited for his seed to sprout. Even as everything turned hard and cold- his own skin blackened and hardened, his joints locked out of movement- he kept the warmth of his pursuit alive, tending to it with steady resolution and unmovable hope.

At night the streets fell silent and heavy, thick with a different kind of dreaming.

The gardener, barely visible in the darkness, his iron figure like a shadow amongst all other shadows, looked at the iron soil that his hand had just smoothed over the seed he had laid. Even though he couldn’t see much he knew it was still there, and growing, and that what would sprout would be wild and bright, and resilient. 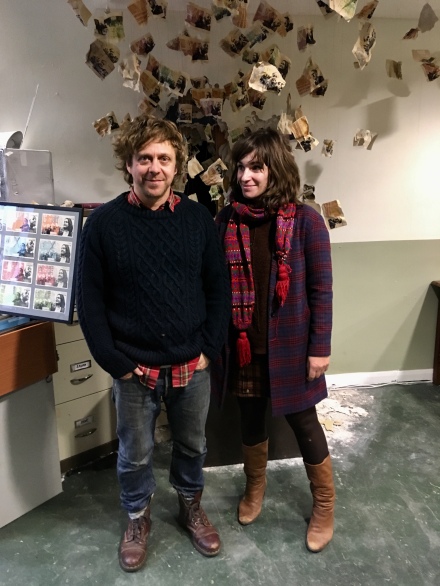 Credits for this month’s episode:

“The Gardener” Written and narrated by Chiara Ambrosio with soundscapes by Bird Radio.

The Bank Job- a conversation with Dan Edelstyn and Hilary Powell of Optimistic Productions about their ongoing project and feature film Bank Job.

“The Lighthouse” written and performed by The Orchestra of Cardboard.

My name is Chiara Ambrosio. I am a London-based independent filmmaker. Visit my website.